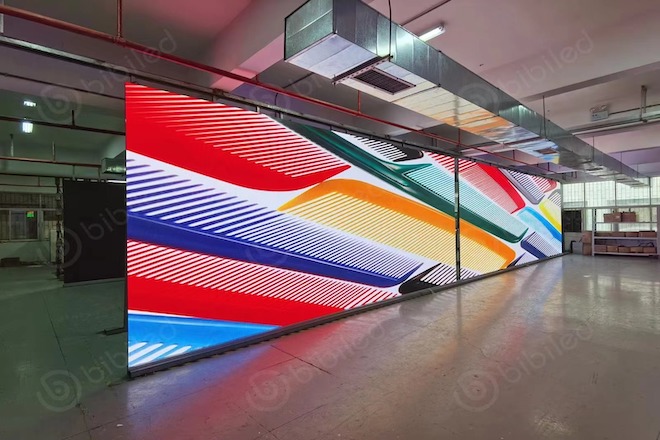 If you plan to buy an LED display screen, power consumption is a decisive parameter; you need to care about it; why?

The LED display needs to light up each lamp bead, and at the same time the white screen is displayed, the brightness is adjusted to the highest so that the power reaches the maximum value.

Black level power consumption refers to the power required to operate the electronic equipment without displaying content on the LED wall; in other words, the energy that the driver and receiver cards are still consuming even when the LED screen is not lit.

When the LED wall is set to standby, it still requires a certain amount of power to continue working even in power-saving mode.

In the above calculation, in this calculation, we assume that the content only consumes 33% of the configured power; it all depends on the application area and the typical content displayed on display.

an LED display is installed in the bank’s lobby, with white background showing the bank logo and the exchange rate value of today’s countries to inform customers that because white requires more LED power, the average power consumption of this content will be higher than 33%.

There is also a case where an LED wall is installed at the restaurant entrance, with a black background and red text to welcome the arrival of diners, and the average power consumption will be lower than 33%.

3. How to reduce my giant led screen‘s power consumption?

And at night, the brightness of the display can be greatly reduced, thereby reducing power consumption.

We can use the following 2 effective methods to control the power consumption of the led screen:

You can manage when the LED display turns on and off through the software’s application, you can program the brightness of the screen according to the time of day and season, always providing the best visual quality, such as daytime and brightness settings night, etc.

If you install a light sensor on an outdoor LED large screen, it is a light-sensitive device used to measure the brightness of the screen environment, this method is better than the first method, mainly because the light sensor can fully automate the adjustment of the screen; of course, fine-tuning can also be done manually, such as setting behavior curves and brightness thresholds.

4. Does Energy-saving LED Display save electricity costs for you?

Today, energy-saving LED displays are a trend in the LED display industry, this type of LED screen is suitable for various applications of fixed LED display and rental LED display, but customers also raised some questions – can this LED display save electricity bills, and how much can it save you?

First of all, the answer is yes; the long-term application of energy-saving LED displays can save much money.

How do we conclude? Just check out the charts listed below. 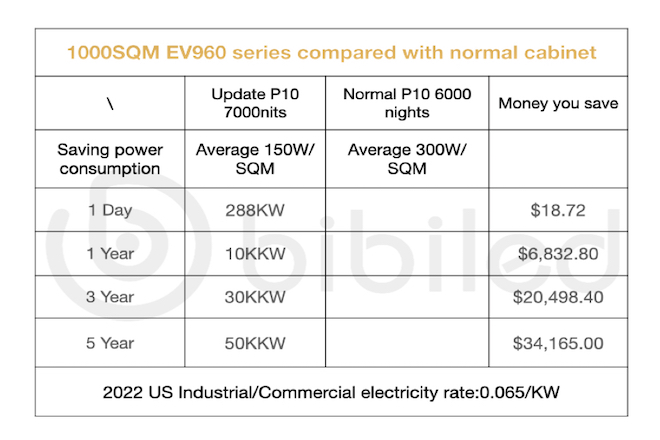 Let’s take the BIBILED series LED display as an example.

We can see that an energy-efficient LED display can save you much money in the long run, thereby increasing your ROI on your LED screen project.

The above explains the knowledge about the power consumption of the LED display. If you want to know how the electricity bill of the single-color, outdoor two-color, and full-color LED display is calculated? Click to find out: How much electricity cost do we need to pay for our LED display?

If you have any questions about the LED display screen, you can leave a message below or email us; we will reply to you as soon as possible.