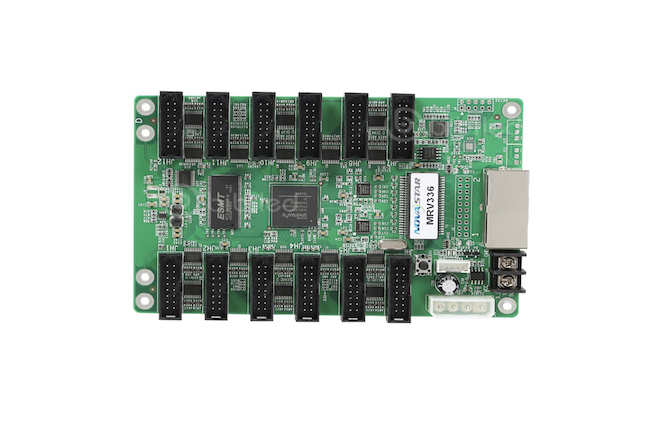 1. What is the function of the LED receiving card?

The main function of the LED receiving card is to receive data instructions from the computer control software and send the received image and video information to each LED and pixel of the LED display to form a complete image or video.

The entire operation process is completed in real-time, requiring fast transmission and coordination with various electronic components and the sending card.

Due to the different prices and brands of the led receiving card, the processing information it receives is different, which is related to its capacity.

In addition to the above capabilities of receiving and processing information, the LED receiving card also has some auxiliary functions:

Suppose your LED display temperature is too high or too low; you can use these temperature data to activate related functions, such as the internal cooling system turning on or off the fan inside the LED display.

In addition to the quality of the LED display itself, the color display requires color correction after prolonged use to ensure color uniformity and perfect contrast; this task requires the use of additional auxiliary tools (calibrating cameras, special software )

Use an ion sensor to detect the level of smoke inside the LED screen. When smoke is seen through a programmed routine, it will trigger an alarm in the control software and send an alert message to the user, and the power system will automatically stop. (Of course, this requires an advanced control system)

In order to ensure the operation and safety of the led display, when non-professionals open the back door of the led mechanism or led cabinet, it is detected that the unauthorized door is opened, an audible alarm is triggered, and the management of the LED display is notified at the same time.

2. What are the features of the LED video receiving card?

3. Where is the receiving card of the led display located or installed?

The LED receiving card is located inside the LED display screen, and it needs to be connected to the LED module because the receiving card has multiple data outputs; according to its processing capacity, the information is sent to a certain number of modules or LED boards.

The above is the introduction of the receiving card of the LED display. If you have any questions about the LED display, you can leave a message below or email us, and the Bibiled team will help you as soon as possible.