Forbes predicted in 2019 that the XR market would grow eightfold. By 2025, the market will exceed 209 billion US dollars; why has XR been so hot recently?

The first reason is that more and more TV and online programs, performances, and movies have begun to use LED virtual XR technology on a large scale, which refreshes the audience.

The main reason is that “LED display + XR technology” is gradually changing the traditional way of film and television production.

After reading this article, you will learn more about XR technology and applications of virtual production in 13 chapters, as well as the XR usage cost budget that people do not often discuss.

1.What Is Extended Reality (XR)? 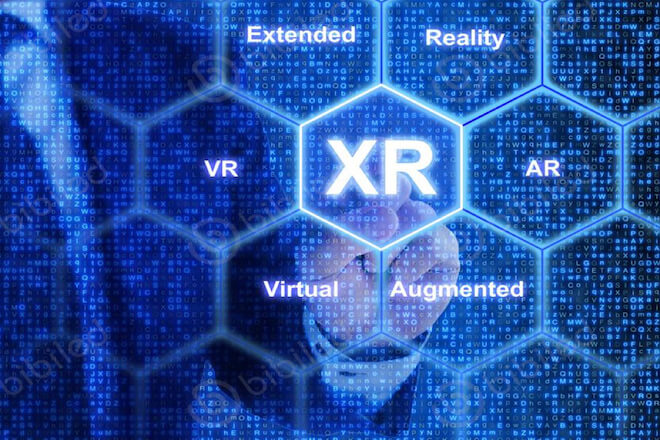 XR stands for Extended Reality, a term that is a technology that combines virtual and real environments, whereas “X” stands for unknown future technology.

2. What Is The Application Of Extended Reality?

The field of XR application is very wide, especially the display category.

From the perspective of LED display, the main application of XR is in these 2 aspects: 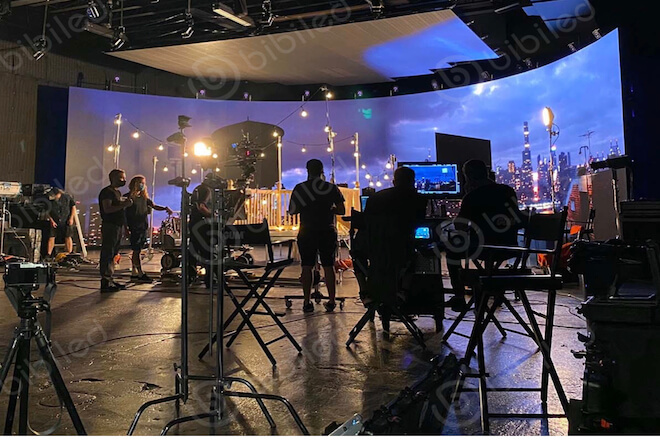 The production of virtual space requires LED displays and floor LED screens to build an ideal space; dynamic and advanced scenes can be displayed through LED displays, which are very helpful for virtual production, shooting, and broadcasting. 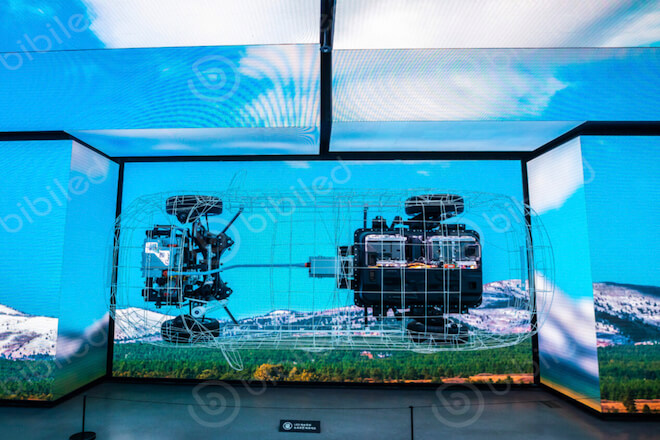 The XR stage can replace the green screen when live streaming, allowing presenters and crowds to see the live interactive scene around them so much fun that event organizers want to take advantage of the new technology to make their business easy and happy.

bibiled is an advanced manufacturer for most organizations participating in this fast-growing innovation to meet high expectations.

4. How Does The XR Stage Work? 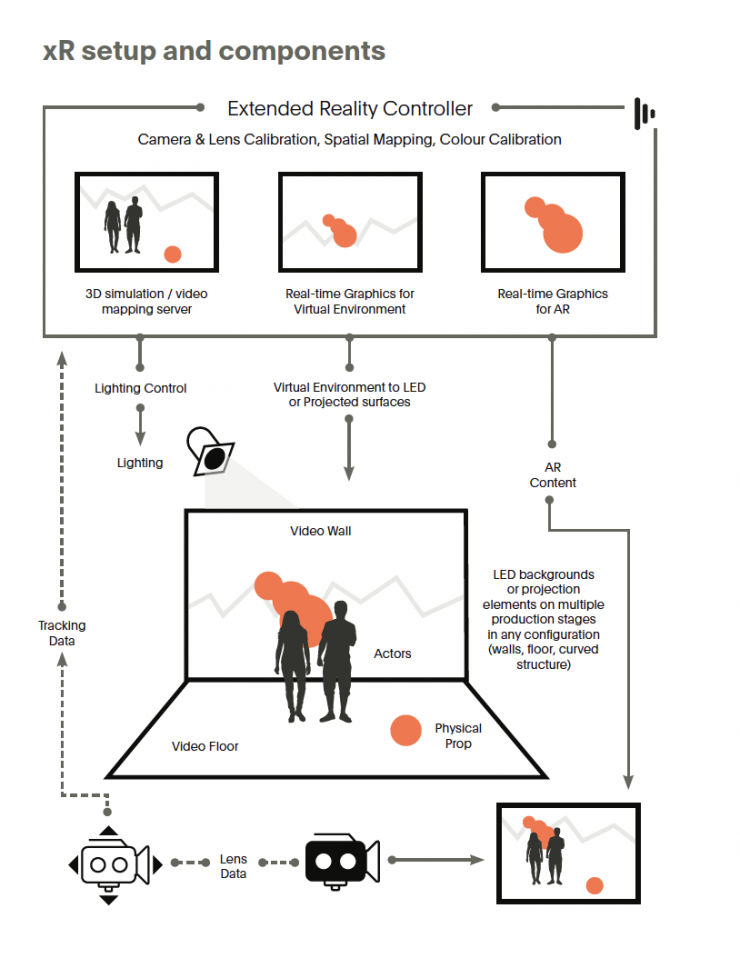 In XR production, a pre-configured 3D virtual environment generated by a graphics engine is displayed on one (or more) high-quality LED screens that form the backdrop for live-action, real-world events.

When combined with a precision motion tracking system, the camera can move in and around the virtual environment, with real and virtual elements seamlessly blending to create the illusion of composition.

The XR stage, combined with a real-time engine, camera tracking, LED display, and virtual scene expansion immerses talent and performers in a 3D virtual environment, graphics can be rendered and displayed on the virtual production LED wall, and you can quickly view the video content.

Editing in real-time, and allowing content to appear around the performer at the same time, will go a long way toward reducing post-production time and budget.

The XR platform can calibrate the camera tracking system faster than a traditional green screen; It greatly improves the efficiency of setting up scenes across different sessions.

The lighting for the film was generated by the virtual production LED wall itself on the XR stage, helping real-world elements blend into the virtual environment without spending time and budget to set up additional lighting systems; this helps save time and reduce the budget, no chroma key synthesis, more realistic, the traditional chroma key technology has the disadvantages of unrealistic image rendering, post-production, and high personnel costs.

With the XR Stage, all scenes can be created without traveling to multiple locations or trying to find locations.

One of the best times to use an XR LED stage is when your production processing time is limited.

Say you need to shoot specific scenes like sunsets and sunrises in half a day, which can be challenging because not only do you have to take into account the weather, but you also have to take into account that there is a big difference in light between mornings and afternoons, and it’s hard to achieve ideal specific scene, studio shooting of the XR LED stage not only helps address time constraints but also reduces the time it takes to get the perfect lighting. LED walls in virtual production give you accurate ambient lighting and reflections.

Another great time to use an XR LED stage is when you have to shoot in many different locations in a short period.

Use LED walls to display virtual backgrounds; you can easily change a variety of realistic virtual backgrounds at any time; for example, your team can choose to shoot in the Amazon rainforest in the morning and the summit of Mount Everest in the evening. This reduces the cost of shooting on set and eliminates the inconvenience of unpredictable weather conditions.

The best time to use an XR LED stage is when shooting in a dangerous location.

Some shooting projects require the production team to shoot in dangerous and extreme locations such as volcanoes, canyons, deserts, and virgin forests; for safety precautions, more security personnel need to be hired, resulting in a substantial increase in costs and insurance premiums.

The best time to use an XR LED stage is when a director or creative team wants more creative freedom to achieve the most desirable results.

Your creative team can now use props and costumes of any color in the scene; plus, when the background is computer-generated and rendered life, the director can ask for creative changes or fine-tuning on set at any time. For example, the director feels that the virtual volcano in the background is too high, so he can ask the designer to adjust the height of the volcano on the spot at any time, and the changes can be quickly reflected on the LED wall.

The best time to use an XR LED stage is when you need to broadcast an immersive live event with real-time foreground graphics and virtual backgrounds.

During the shooting process, the live host may stand on a stage with an LED background, focusing on sitting in front of the TV or computer as “host + virtual screen” for example, the host may be standing on the top of the mountain or somewhere in space to broadcast live.

Finally, one of the most important reasons most filmmakers are looking into XR LED stage production is because it helps save post-production costs and time.

The sound of “post-fix” is often heard at the shooting location, especially for those special effects-intensive films, and virtual production with XR LEDs can help eliminate the time-consuming task of post-fix.

7. Virtual LED Display VS. Green Screen: Which Is Better For XR Extended Reality?

What are virtual LED displays and green screens? 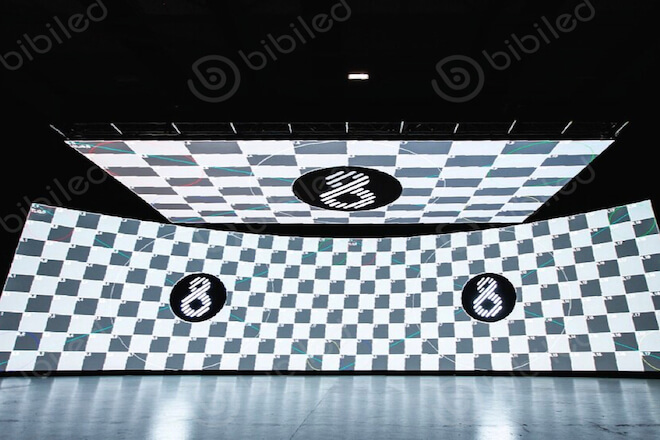 The virtual LED display is a 3D technology innovation; it can help create a variety of themes you want by rendering with a real-time 3D engine to achieve a virtual scene where real people and fictional scenes are fully integrated, so what you shoot is what you get. 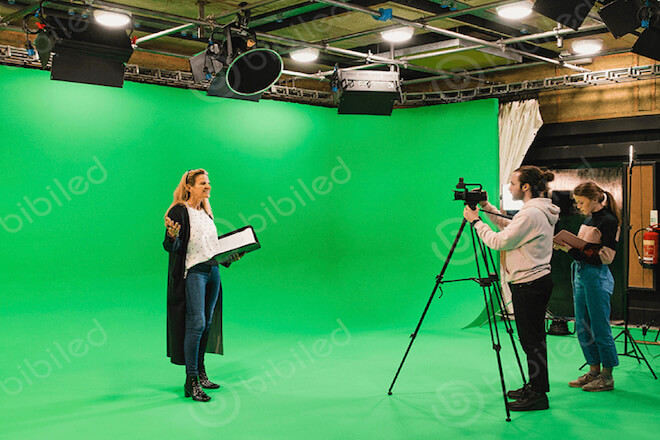 The green screen technique is chroma keying, which involves a plain wall as a background, with an active object or objects placed in front of the screen. During the post-production stage, solid colors are replaced with the desired background, a technique that has been around for years in the games and media industries.

The similarities and differences between virtual LED display and green screen

The green screen and the virtual LED display can be used as a background for shooting, and the frame can zoom in and out.

1) The difference in total cost:

Generally speaking, the price of purchasing a high-resolution LED display is much higher than that of a green screen.

But in the long run, LED displays are more versatile and cheaper than green screens.

The post-production of green screens requires more capital and human input than LED displays, and every event needs to consider this factor, and green screen production is not cheap.

2) The difference between post-editing and in-production editing:

Green screen photography has a long history and played an important role before LED screens became popular in film and television shooting.

The green cloth shooting focuses on post-processing, and the actors usually perform imaginatively in front of a green/blue screen. After computer post-processing, the director can see the final picture after combining performance and special effects.

The shooting method with the LED screen as the background has real-time characteristics.

You can see the following cameras when the set moves, achieve accurate and realistic visual tracking and edit the content being played on the monitor in real-time. XR shooting allows the director to directly experience the real-time picture on the spot, shortening the workflow and greatly reducing post-production. Production workload.

3) Shoot the difference in the production process

In the past, film production was done with pre-shooting before a green screen, followed by post-production and special effects editing. Still, with LED screens, virtual productions fully allow real people to merge with fictional scenes for real-time display and editing.

The virtual production of virtual LED displays can liberate film and television creators; actors no longer need to rely on imagination to perform, and directors can truly create freely.

XR LED Walls can be customized to meet your unique requirements according to your installation and setup; we commonly have curved LED walls, corner LED walls, and creative LED screens. 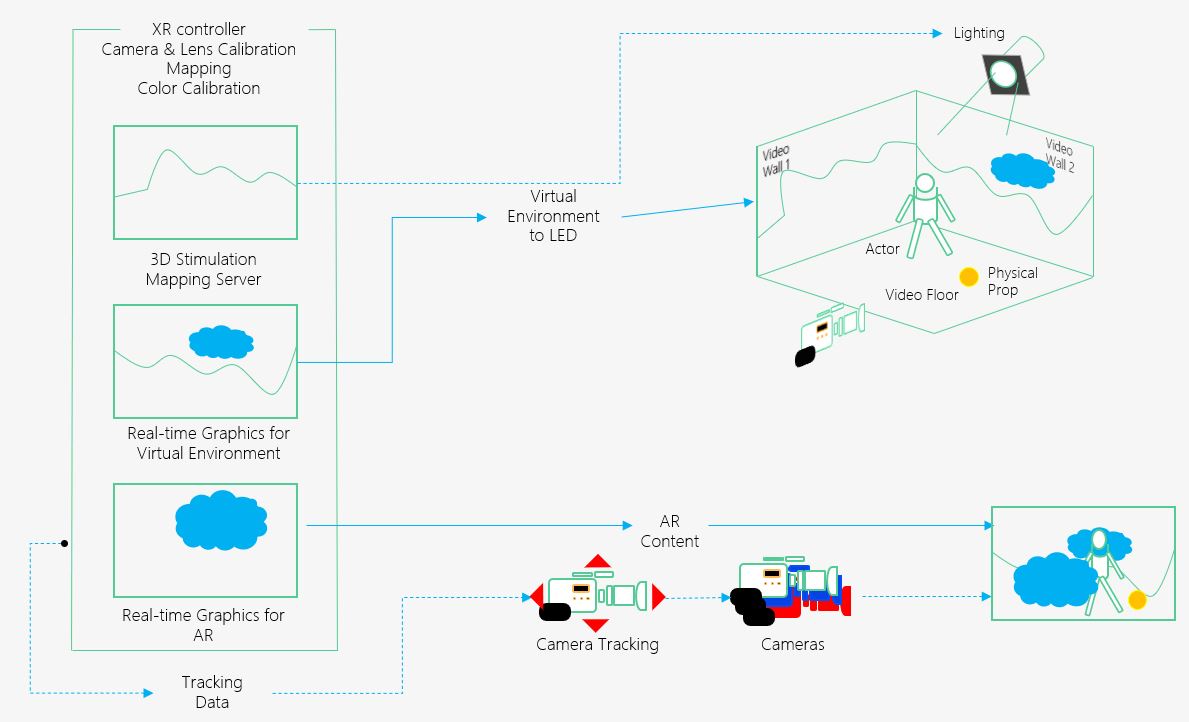 The LED wall is the heart of the XR stage. 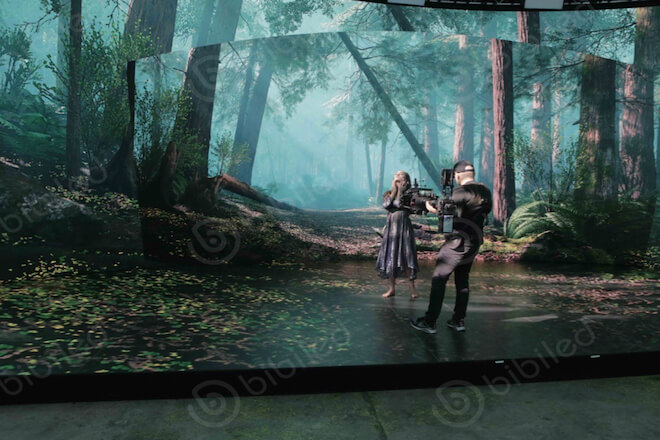 1) Launched in January 2021, MADO Xr’s RPG studio in Paris is one of the largest XR studios in France, located in the 800-square-meter film studio in Epinay. 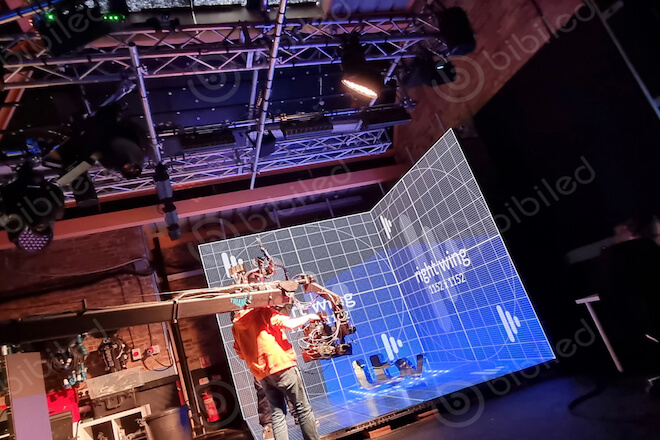 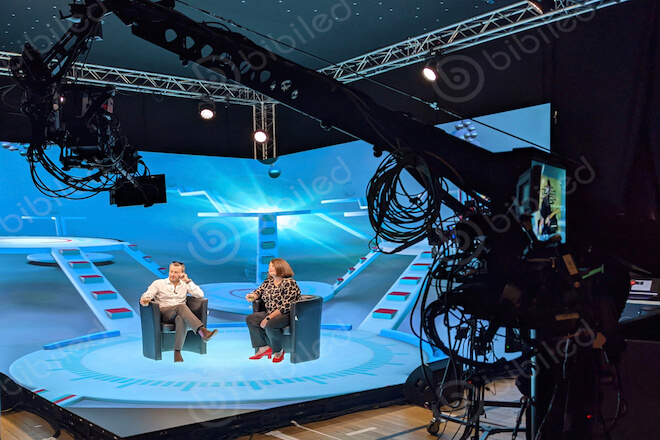 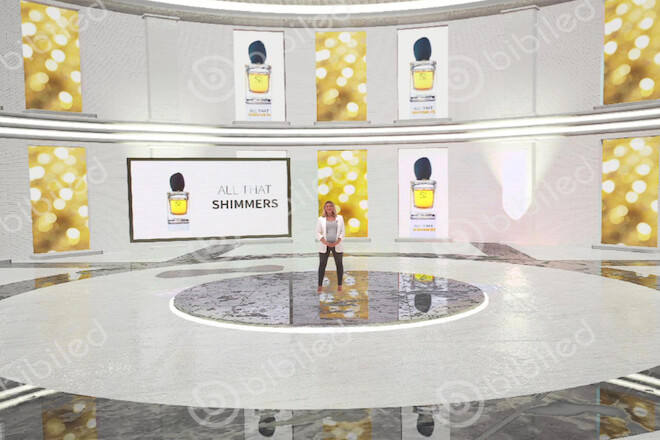 11. What Technical Points Should We Be Careful About The LED Screen For The XR Stage?

The LED display screen must ensure true color fidelity, and the color temperature value must be between 6300K and 6500K.

If you directly simulate the light source in the real world with high brightness, you can save the workload of lighting, and you don’t need to spend a long time in post-production to complete the work.

The moiré effect is related to pixel pitch, which is a very tricky problem for LED virtual production, and we have some solutions to deal with it, such as temporarily using the green screen as the background.

The most reliable way is to find a professional photographer to solve this problem according to the specific situation of the scene, such as finding the right distance between the lens and the screen.

The most targeted solution is to find a high-quality LED display that flickers less, and photographers can set the shutter speed to 1/60th of a second since normal LED screens typically run at 60Hz.

12. How Much Does An XR Stage LED Screen Cost?

The cost of an XR stage screen or virtual production LED wall system depends on the space or size of the LED screen used for the XR stage, video processor, and hanging/stacking system.

With so many decisions affecting the final cost, it’s important to understand them before choosing these systems.

For example, take the BIBILED 500, 2.6mm with Brompton control system.

As we said in the first chapter earlier, XR technology includes augmented reality (AR), virtual reality (VR), and mixed reality (MR), a series of immersive technologies dating back to the 1800s.

This chapter briefly describes the key milestones in the development of XR:

Many people in the early 2000s did not well understand XR technology, but starting in 2010, XR technology started to gain momentum:

Today, XR technology is being adopted in various fields from manufacturing, education, healthcare, construction, and even law enforcement.

14. Why will The BIBILED Wall Be An Ideal Solution For The XR Stage?

The above is a detailed introduction to XR Stage. We analyze XR technology, applications, reasons for use, etc., from 13 aspects.

The combination of the real and virtual worlds will become a trend in movies and event stages. Why don’t we seize this creative opportunity to shine for our business!

If you have any questions about the XR stage, you can leave a message below or leave your information, and we will answer them for you as soon as possible.