1. What is the display aspect ratio?

2. How to calculate the aspect ratio?

3. Why are aspect ratios important?

4. What are the popular aspect ratio formats?

Have you ever encountered such a situation, a very good high-definition video on your mobile phone, but when you play it on a computer, you feel that the screen is stretched or the screen cannot be filled? Why is this?

Next, let’s look at what aspect ratio is more suitable for your LED display.

1. What is the display aspect ratio?

According to Wikipedia, the aspect ratio is the ratio between the width and height of the display, it is represented as two numbers separated by a colon (X, Y), where X corresponds to width and Y corresponds to height. Common monitor aspect ratios past and present include 5:4, 4:3, 16:10, and 16:9.

Aspect ratio refers to the relationship between the width and height of something and is often used to describe computers, TV monitors, camera sensors, print, digital LED displays, and more.

In short, the aspect ratio of an LED display is usually expressed as two numbers divided by a colon, where the width is usually the first number and the height is the second number; for example, a 16:9 display is 16 inches long, 9 inches tall.

2. How to calculate the aspect ratio?

You need to divide the original height by the original width and then multiply this number by the new width to get the new height.

These steps will give you the correct height for your edited image or video.

3. Why are aspect ratios important?

The aspect ratio plays a very important role in your display, and if your display has the wrong aspect ratio, the display will stretch, chop, squeeze, shrink, or distort.

It is a high-quality new display, but because of the wrong aspect ratio, the playback effect does not play a real visual display effect, so it is very important to use the correct aspect ratio. 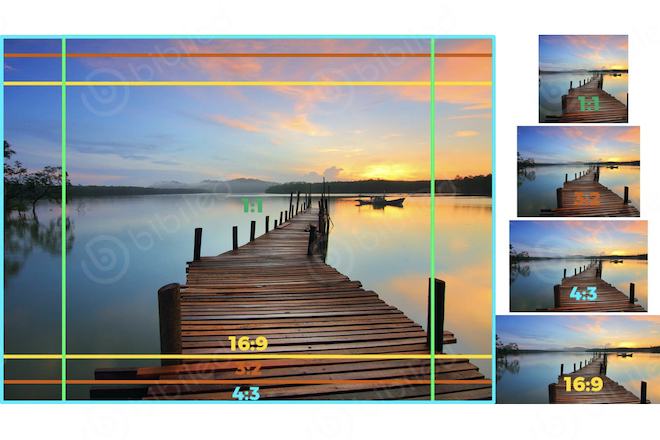 4. What are the popular aspect ratio formats?

So what are some common aspect ratios?

The image is equal in height and width, like a square, commonly used for: Instagram, print photos, phone screens, etc., but not optimal for other digital platforms and TVs.

This aspect ratio is very popular with medium to large format film cameras, and for standard photography and art photos, 5:4 is a commonly used aspect ratio.

This aspect ratio type is used in most full-frame cameras, the most common in digital cameras and smartphone sensors, and the most popular in photography.

The 16:9 ratio provides a panorama format and uses the ratio to capture wider images compared to other ratios. It is most common in movie theaters and computer monitors. Because of its large ratio, landscape photographers prefer this ratio to capture more expansive scenes.

16:9 and 4:3 are two of the more popular aspect ratios right now, but which one is right for you?

16:9 usually works best because the resulting frame width is 78% higher than other heights; the resulting image is widescreen, suitable for capturing wider areas and videos with more elements and capturing higher images.

4:3 is very suitable as it provides higher resolution and is suitable for capturing pictures of little scenes.

The above can only be used as a reference, and the specific needs to be selected according to the actual situation.

The above is the relevant knowledge about aspect ratio. After you understand the basic principles of aspect ratio, if the display image becomes unstable or stretched, you can also consider whether it is the cause of aspect ratio to troubleshoot display problems quickly.

If you have any questions about LED displays, click to help you right away.